What is multiple myeloma? | TrendingResults.com
Menu

What is multiple myeloma? 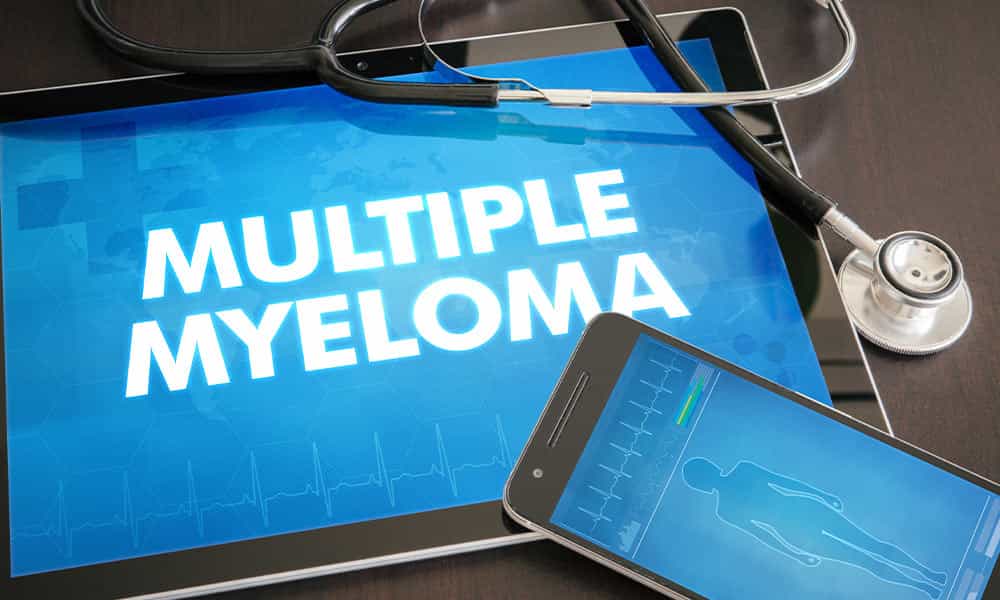 Multiple myeloma is a cancer that originates from a type of white blood cells called plasma cells. These cells are primarily found in the bone marrow and are an important part of the immune system, as they produce various antibodies used by our bodies to fight infections.
Multiple myeloma damages the plasma cells, which turn into cancerous cells known as myeloma cells that, instead of producing the useful antibodies, produce an excessive amount of a single antibody called paraprotein or protein M. However, this antibody is not useful to the human body. Over time, myeloma cells multiply and accumulate in the bone marrow, where they grow and mature into progenitor cells for red blood cells, white blood cells, and platelets (the cells that circulate in the bloodstream. This causes problems in various organs, primarily the kidneys.

Who gets multiple myeloma?

Multiple myeloma is the second most common blood cancer.
Globally, more than 750,000 people are living with this disease.
It is usually diagnosed as people age, peaking over age 65. The likelihood of developing myeloma is greater in male individuals. A diagnosis of monoclonal gammopathy of undetermined significance (MGUS) is a risk factor for developing multiple myeloma.

It is unclear what causes myeloma; however, as with other neoplasms, the risk is increased in people exposed to radiation for accidental or therapeutic reasons (radiation therapy) and in relatives of myeloma patients, indicating the possible contribution of acquired and congenital genetic alterations in the onset of the disease.

How is multiple myeloma diagnosed?

Multiple myeloma is a complex form of cancer. Several tests are usually needed to make an accurate diagnosis. Your doctor will decide which tests are necessary. The most common ones are listed below.
The diagnosis is made by identification of typical pathologic cells (tumor plasma cells) in the bone marrow following bone marrow aspirate and/or bone marrow biopsy. The disease is accompanied, in a high percentage of patients, by the presence in the blood of the antibody produced by the diseased cells (monoclonal component), which can be identified with a specific blood test, the serum protein electrophoresis or protidogram.
Other laboratory signs frequently present at diagnosis are altered renal function, anemia, increased antibody levels, and increased calcium.
Radiological investigations may show signs of bone erosion (osteolytic areas) or its complications (fractures).

The good news is that tremendous progress has been made in recent years in the diagnosis and treatment of multiple myeloma. Over the past two decades, intense scientific research has led to the development of several new types of drugs. 10 years ago there were only 3 innovative active ingredients, but today there are more than twice as many.

Atopic dermatitis, also known as endogenous eczema, is a benign disease with a multifactorial aetiology, which, together with asthma and allergic rhinitis, is one of the atopic diseases, i.e. diseases related to the tendency of certain (atopic) individuals to manifest amplified immune responses to small amounts of allergens. We distinguish two forms of atopic dermatitis… END_OF_DOCUMENT_TOKEN_TO_BE_REPLACED

What is erectile dysfunction? First of all, in defining erectile dysfunction, it must be made clear that we are not talking about a disease, but often it can be a symptom revealing the presence of a physical pathology, such as an alteration in the cardiovascular system, an endocrine-metabolic problem, a neurological disease or even diabetes.… END_OF_DOCUMENT_TOKEN_TO_BE_REPLACED

Erectile dysfunction is a more common disorder than one might think, and it is easy to see how it can put men who suffer from it in check. However, it is not easy to understand what solution can help achieve significant improvements, also in light of the fact that the causes can be of a… END_OF_DOCUMENT_TOKEN_TO_BE_REPLACED